Alright, I’m hearing a lot of talk about the wars on this Earth 3, but can’t find a post on it anywhere, and I’m not planted. Anyone care to drop an update, and some alliance territory screenshots, for those of us not playing?

so we planted planning to farm this world

i planted with abdul rafay

and i died 2x this era

so who’s winning? who has the most territory? who’s ranked higher? please give us more…don’t be a tease hehe

Where’s Reporter Pete when we need him?

As far as I know, before war started Gays had control in Asia Africa ans Aussie, while ALI had the Americas. So far, Gays has taken GL. They had pushed a bit into NA (you can see a few remnants), but took a few hits and had to retreat back it seems. ALI had 2(?) people die, and 1 of them was replaced.

All in all, quite an interesting war, if at all RW will join in remains to be seen. WN is allied to ALI, but not sure if they have directly engaged Gays.

Come along and throw salt at each other. Lets get the forums back up and runnin in time for CE? 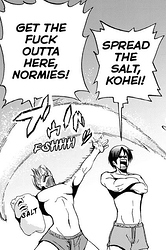 Thanks kuzuma, so who are RW? anyone know? seems they have 5 relics, but less power than gays who have no relics and close to SIADA. Maybe RW seeks to capitalize on the war between gays and ali and take all relics for the win without having to engage anyone? Super interesting era it seems…please keep us posted.

Not a lot of changes, Gays seems to be trying to invade NA again, lets see how that goes. Some BC trashtalk too

spice the forums up too pls

Update please…heard there was some good fighting today. 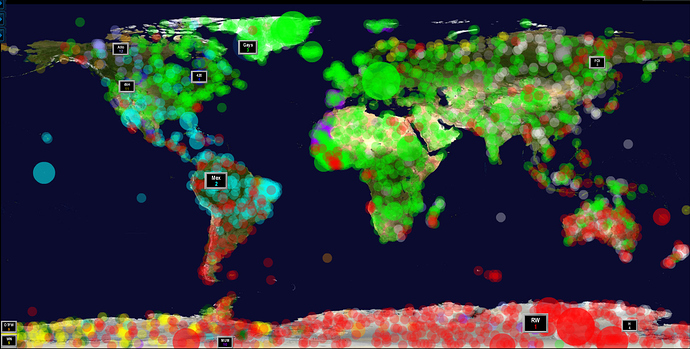 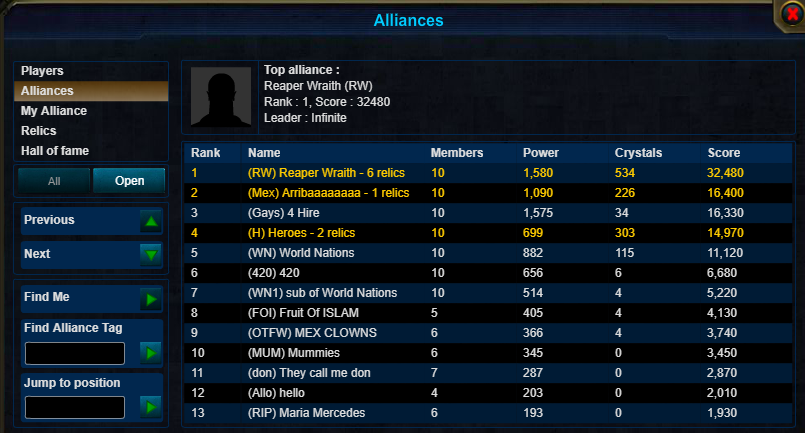 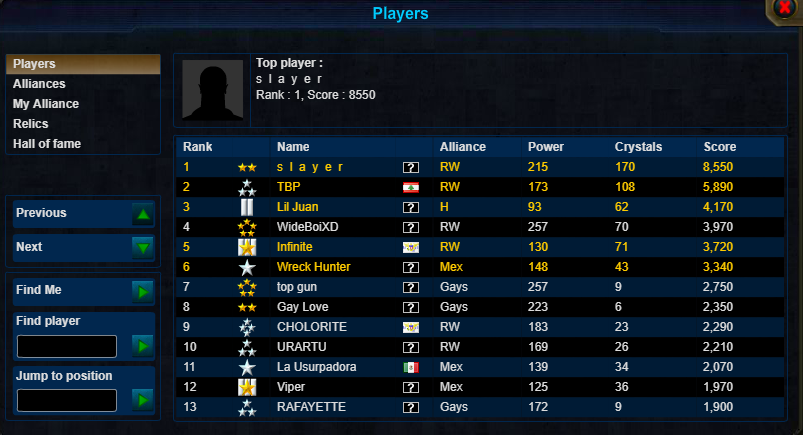 Wow super era too bad it ends in 350 ticks

hey guys, does anyone know what this means?

i sent the admin a message prior to receiving a warning but she never opened it, and hasnt responded on skype either.

Looks like it is a warning for being a farm. Did you build ops for someone else to take?

Of course not, I only planted after you made this forum thread cus the era seemed interesting and to annoy some people. I havent built ops for anyone, taking ops from anyone in a farming manner, none of that
What seems odd to me, that someone else seems to be using Ilonas account or atleast admining her world while she is offline

trash ass mex, guess they used to farming dead worlds, better luck next time, my kills from the last 12 hours alone.
Planted tick 850
let me guess, the usual crap when they lose “we werent ftw, we werent trying, we were having fun, all the people we planted didnt even do anything”