It’s almost the happiest time of the year and I thought we left our differences apart to spice things up again with a draft event. I know CE3 was exhausting and some of you don’t wanna play again but this isn’t something as competitive as saving your units for 3800 ticks, but rather an ALL OUT WAR between bigger teams never formed before

I am extremely curious to see how the pick order will go this time around, as the leaders will definitely be different and so would the skill of various players

The idea is to make a draft pool of players who want to register and get picked by the leaders in a Snake Type order
Last time’s example:

We had a fixed number of teams and fixed number of players per team for F4 but this time I don’t want to see people miss out from the event just because they registered a day too late, so we’ll set the numbers after the registrations.

It will most likely be a 2 ticker for 1000 ticks (20 days) for the era healthiness and fairness of everyone active and inactive. Draft expected to be livestreamed next weekend and I’ll make sure we don’t lose the video this time. Next month is the end of flash for the majority of browsers after all, we might not get to play the game the same way we did all this time, so I definitely want it to be memorable

Every event usually has their own flaws because nothing can be perfect in this game, but for the sake of having fun instead of killing ourselves, I believe we can all work together for one guideline of no NAPs to make it as good as possible.

A lot of people wanted to make this happen again and I think it’s time to take the initiative, however we would need a solid amount of people to pull it off and get the get go from the game’s staff. So if you want to have some fun, you know the drill… Tell everyone, retired or not, CE winners and CE losers, Skype chads or Discord peasants, this might interest any of them

Can’t wait to see everyone’s opinions on it, which I’m hoping are positive
Wholeheartedly, Capo

If you want to be part of this, this is the registration link:

I can see it drowning already @Greeny

At least I wont be banned.

Ill sign up, aslong as I can be guaranteed I wont be on greeny’s team

I can’t wait to relive the experience of high school dodge ball teams draft, where I was always the last pick lol

You gotta love to see this. Sending off BD with a bang.

Glad to see you’re back, give me a reply on skype, we are indeed looking to go off with a bang

So 60 real players registered so far, and there’s still 5 days till sign ups are over and we do the drafting. Current draft pool so far:

Still deciding on the leaders, but the currently most suggested and promising are:

Let me know what you guys think about the whole thing

I nominate Steven (yessum) to be a captain, because it would be incredibly entertaining to watch an Aussie lead one of these teams. (Also I am incredibly entertained that Yessum signed up since I thought he actually had put this game in the past. Oh Steven, the good times we have had together) 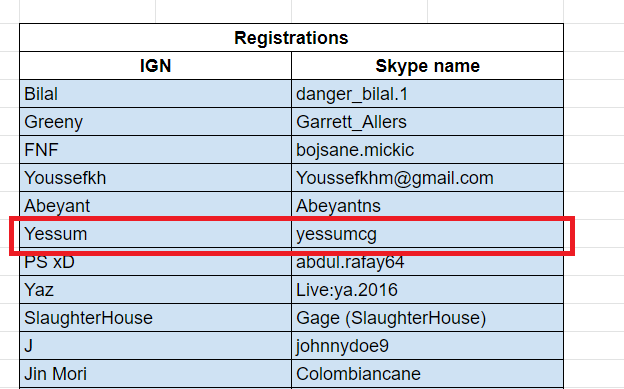 I’m extremely proud that there are basically no SGC signed up for this. We did it! We actually quit finally!

I nominate Abdul Rafay (Ps XD) to be a captain.
Lead a team noob @_Abdulrafayyy 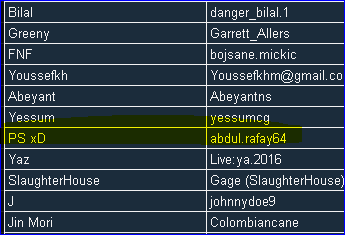 i nominate myself to be captain.
lead a team pro bp !!!

Dunno who is Carthage but I like the other 3 leaders, I think they’re suitable for this event, great work!

i vote capo to lead
#Capo_Leader_Event_Era

@Kenny Get your ass in here and lead a team