I was once a mod on the old BattleDawn Forum (Jake

). I was about 14-15 years old when I was a mod and now I’m 23 and graduating college with a bachelors in CS haha. Crazy how things change. It’s odd revisiting this game! What’s new?

Also who’s left around? I saw Simmen is still on the forum, I saw Joe is still an admin, is there anyone who might remember me left around here?

Also what’s going on with future ideas in regards to BattleDawn? Is a non-flash version of the game being considered for development? I often think about this game’s sandbox rts style and I think about what a modern adaptation would look like. It’s always fun to think about!

Anyways, I joined M1 as an experiment, so I’ll be around for at least another couple weeks! What’s up?

Also what’s going on with future ideas in regards to BattleDawn?

Sequel comes out later this year with some decked out graphics mobile app(i think?) and its on steam

Damn, as in this Jake? 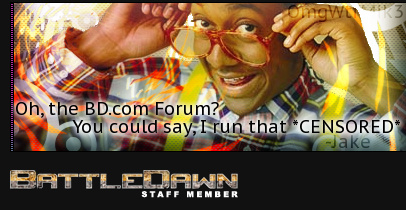 Welcome back man! Kinda freaky because I actually asked @Doomer_Nationalist if you were still around the other day. Some kind of timing that is haha

Welcome back Jake! Glad to see old faces return to BD. One good side to this whole Covid situation…

Another face I didn’t think I would see again. Welcome back man. Gato has multiple options for a post flash future for BD as well as a successor to the game in BD2 that is being developed.

you really could say he ran that CENSORED

Woahhhh I think I remember you, welcome back

What are you wearing right now JAKE from STATE FARM?

Yup! Haha that was my signature forever!!!

Wow that signature photo brings me back.

With Alexander in charge, double-posting is now allowed and even encouraged