Hoi,
it’s been a long time I’ve never typed in the forum but at this point, I should have let you guys know something happened on the last g1.

it was one of the great era as admin @Fluffeh said on bc because after a long time, there’s war happened until HAVOC and seriously it was amazing.

But some sad things happened even middle of the era.

The first thing happened around the first 1000 tick –

2 member of our enemy side got permabanned because of account share ( they admitted it and gave an apology to world admin @Fluffeh ) then after that apology one of them ( the one without an army ) got deleted and the other one ( who was powerful ) turned to temp banned from permabanned.

We discussed it with world admin and even with @Alexander and at the point, they acted like " it’s not first-time red smoke turns to orange one in bd ) so I just have to accept it reluctantly because the war was going on so hard. Anyway that case already closed by time once we stopped objecting then we focused about the game while the enemy was still cheating.

I don’t want to argue about admin’s decisions on that topic I just wanted to let u guys know what happened once and now lets to get in what I don’t find fair!

This era was a custom one as @Fluffeh admitted before on even forum, it was calling as XPv2 and there’s 1 rule important about the end.
let me share with you. 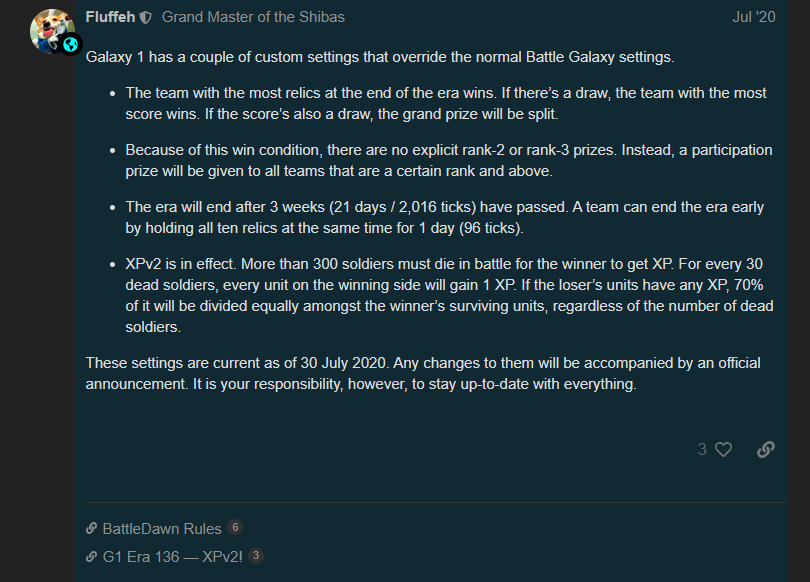 The team with the most relics win regardless of scores.
and it’s like that now. 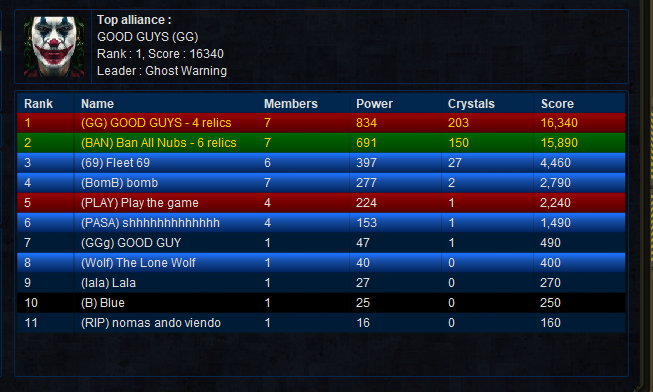 so at this point, we are the winner as admin admitted many times on Bc’s and we made sure about that with our PMs to him anyway. 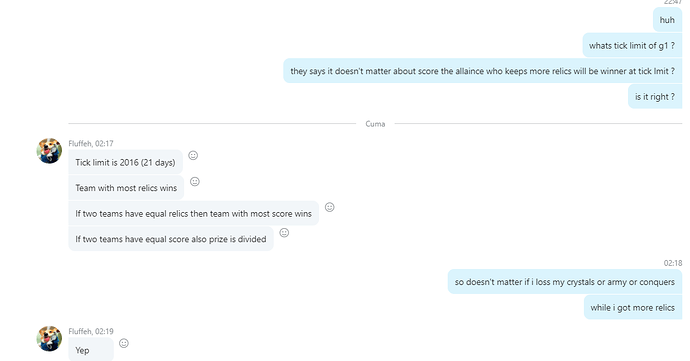 so at this point, that of course affected our war plans, tactics, and strategy even.
as the shorter way if I should give example. Since era start my team never cared about score ( garrisons, conquers, crystals ) we were focused to grab more relic and we did.

but when era over, @Fluffeh declared us as the winner that wasn’t a problem but after the day we learned enemies ( we got 1# with less relic as you can see on the score table I shared at down ) sustained as a winner too so we both have 3000 blues reward.
it’s the first era over with 2 winners in bd history I don’t know if we will see more nonsense things happen in the future or if there’s a future anymore.

People who lost the era while cheating, defending themselves with the (news) admin posted at tick 1 before even tick start and as the admin says it posting by automatic. So they acted like " we didn’t know the rule " which was a lie but the goodwill of @Fluffeh did the job which was unfair.

Here is some proof of how they knew about the customs rules ( which posted on 20 July on the forum ) and lied while acting like " we did not know " they even couldn’t believe that lie would work but… sad Idk what to say.

they were rushing on our relics at the last 300 tick and we were like defenders because we were thinking the game still has some fair at least for applying the rules created before.
small reminder, we could play for kick them out of 1# or even could swap members from supporter alliance ( as like they did last tick ) if we knew rules can be broken that easily.

all I am questioning, why did I waste my time and sleep if my enemy will be sustained as a winner while they lost the era on rules? or what would happen if we were finished 1# while keeping more relics at this point? double reward?

I am leaving this topic to your logic guys, I do believe there’s someone wants to see justice in this game still and this community won’t fail like that with cheaters, liars, and their says. IDK how that can be fixed but I do believe maybe @Cosmin1980 or @Alexander or @Fluffeh can do something before it’s too late.

If you destroy justice, you will collapse too.

To be clear, this era doesn’t have two winners. The sole winner of the era is BAN and BAN got all of the rewards they would’ve if I hadn’t’ve made the mistake. However, the rules of the news post are authoritative and because I mistakenly posted two different reward conditions, I must honour both. GG got some extra tokens, but BAN is the winner and GG knows this. I’m sorry I made that mistake and I’ll make sure it doesn’t happen again. This was indeed one of the best G1s in a long time (I was logging on as if I were a player!) and I hope you’ll also remember it the same way.